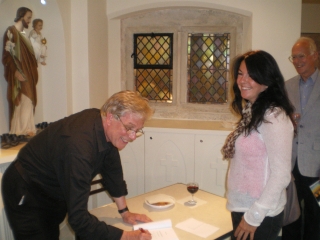 Fr Ulick Loring was born in St Leonard’s-on-Sea in 1946.  His father, James Loring, was Director of the Spastics Society for a number of years  and was awarded the CBE for his work in this field. His mother Roberta Loring (nee Young) came from a family of engineers with Methodist roots. Fr Ulick grew up in London and attended The Oratory School, Woodcote, near Reading. He gained a BA in history in 1971 and later an MA in history in 1975 specialising in the Period of Appeasement. Having worked in the Civil Service for thirteen years he was accepted as a student for the Archdiocese of Westminster in 1981. He trained at Allen Hall gaining a Bachelor of Divinity from Heythrop College in 1986. He was ordained by Cardinal Hume at the Church of Our Lady of Dolours, Fulham in 1987.

He has worked at Our Lady’s Church, St John’s Wood 1987-1992, University Chaplaincy, Gower Street, 1992-1995, St Thomas of Canterbury, St Leonard’s-on-Sea, 1995-1996, Holy Redeemer, Hollington, 1996-2001. He took a sabbatical in 2001 during which he made a comparative study of the novels of Evelyn Waugh and Shusaku Endo. (see Luke Coppin, “The doubting prophet of Japan” The Catholic Herald 22 September 2006) In August 2002 he took up the post of Parish Priest of St James’s. He holds a certificates in counselling from Kingston College,and from the Centre for Transpersonal Studies, Ealing.  He gained a diploma in counselling from Richmond College and is a qualified, practicing counsellor and a member of the BACP.

He has visited Moldova on a number of occasions where he was involved in setting up a project to finance the construction of a children’s centre in Bender. He wrote on this in “Travels in Transdniestria,” The Catholic Times. 4 June 2006. He has also written on the priest as counsellor in “Why Jung made me a better priest,” The Catholic Herald, 27 July 2007, “Priesthood and Counselling” The Furrow, May 2007, and ”Priests care for people, but who cares for priests”. Catholic Herald Herald 9th July 2010.  He has written an autobiography Mission Impossible (2011).  Anew edition (2014) can be obtained from the parish, price £12.  He is the author of ‘Home truths'(The Tablet 12th May 2012) on his parish’s creation of a DVD on Baptism ‘Our Child’s Baptism.’   This is available from the parish price £12.50.

His hobbies are his tortoiseshell cat, Cleo (her predecessor, Tatiana, who was killed by a hit and run motorist on 22nd September 2012), being an armchair supporter of Chelsea FC, creative writing, and his ancestor the Methodist steam engine designer, Timothy Hackworth. He laid a wreath at Hackworth’s statue in Shildon, Co Durham at a special ceremony in September 2004.  In 2012 and 2013 he donated original papers and drawing to the Archive of the National Railway Museum in York

Father Ulick was short-listed by the NCFE for the “Student of the Year Award 2007″ for his work in transpersonal studies.

Together with the Order of St Michael of the Wing, he organised the unveiling of a memorial to King Manuel II and Queen Augusta Portugal. This was attended by HRH Dom Miguel of Braganza, Infante of Portugal, the Portuguese Ambassador, the Mayor of Richmond, Councillor Celia Hodges, and Right Rev Bishop George Stack. (See ”The King who waited in line for Confession”, The Catholic Herald 25/9/2009 and ”Church memorial recalls link to an exiled king” Richmond and Twickenham Times 2/10/2009.)”

In February 2010 he addressed the Ficino Society at St. James’ Independent School on “Shusaku Endo – prophet of East and West”.

In May 2012 he celebrated his Silver Jubilee as a priest.  He is the author of ‘Archetypal Renewal in the Catholic Church,’ [A Call to Action Newsletter No 2 .] More recently he has written Tatiana’s Christmas Dream a short story for children.  He is currently working on Shifting Images which is a reflection on the life of his father, and Outsiders.  These are essays on individuals in history with whom he identifies.  His article  ‘The History of St James Church’ appeared in TWMAG of November 2012.